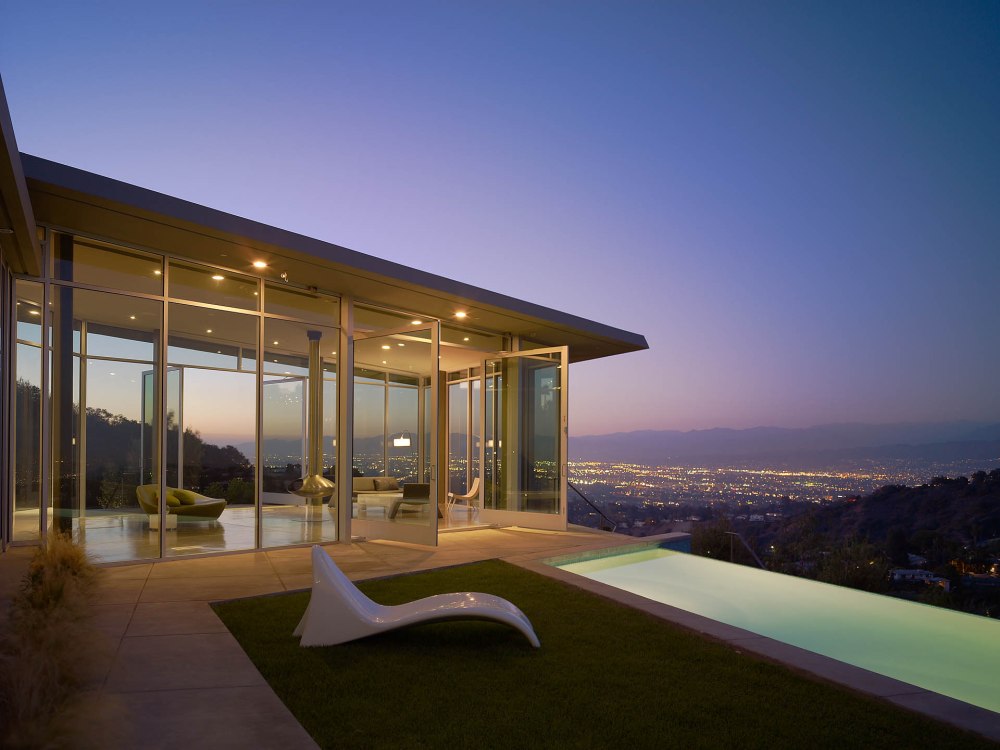 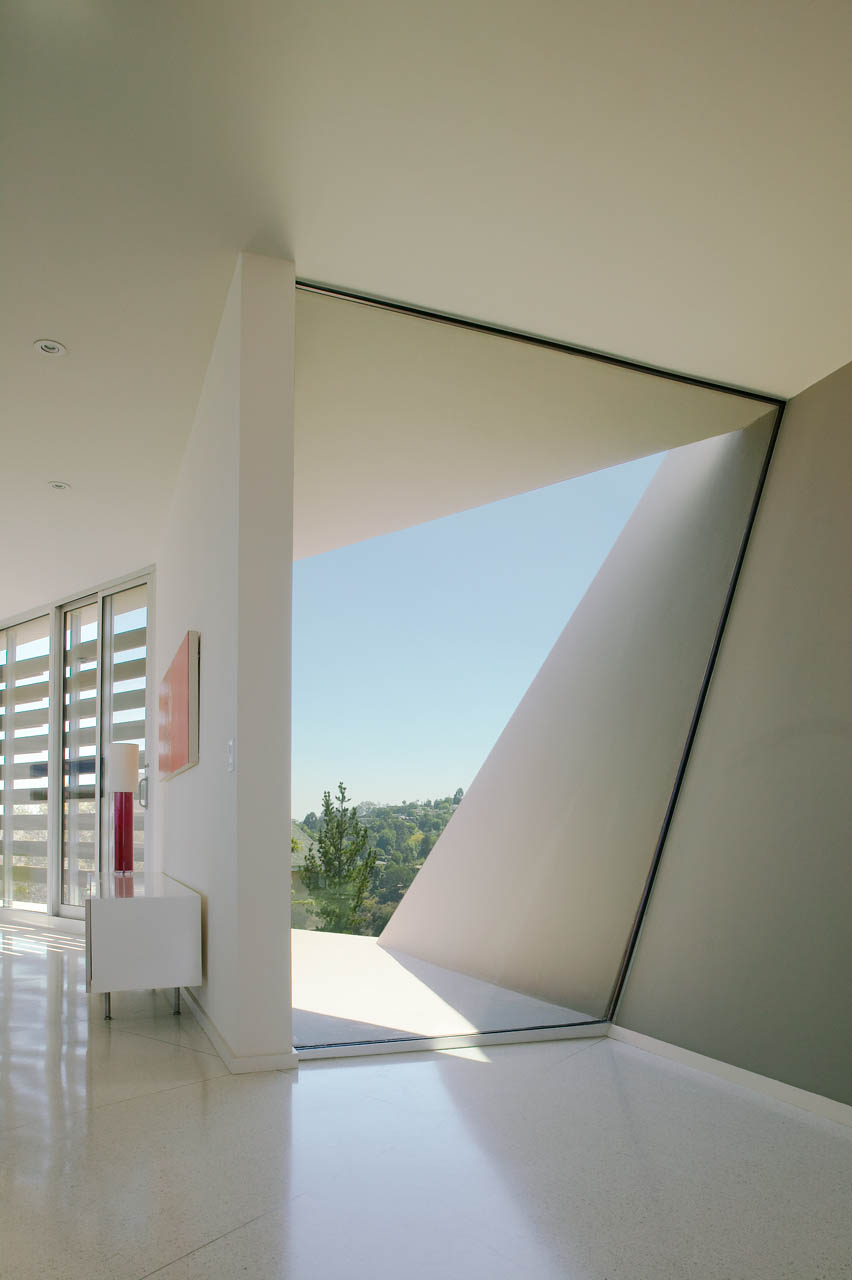 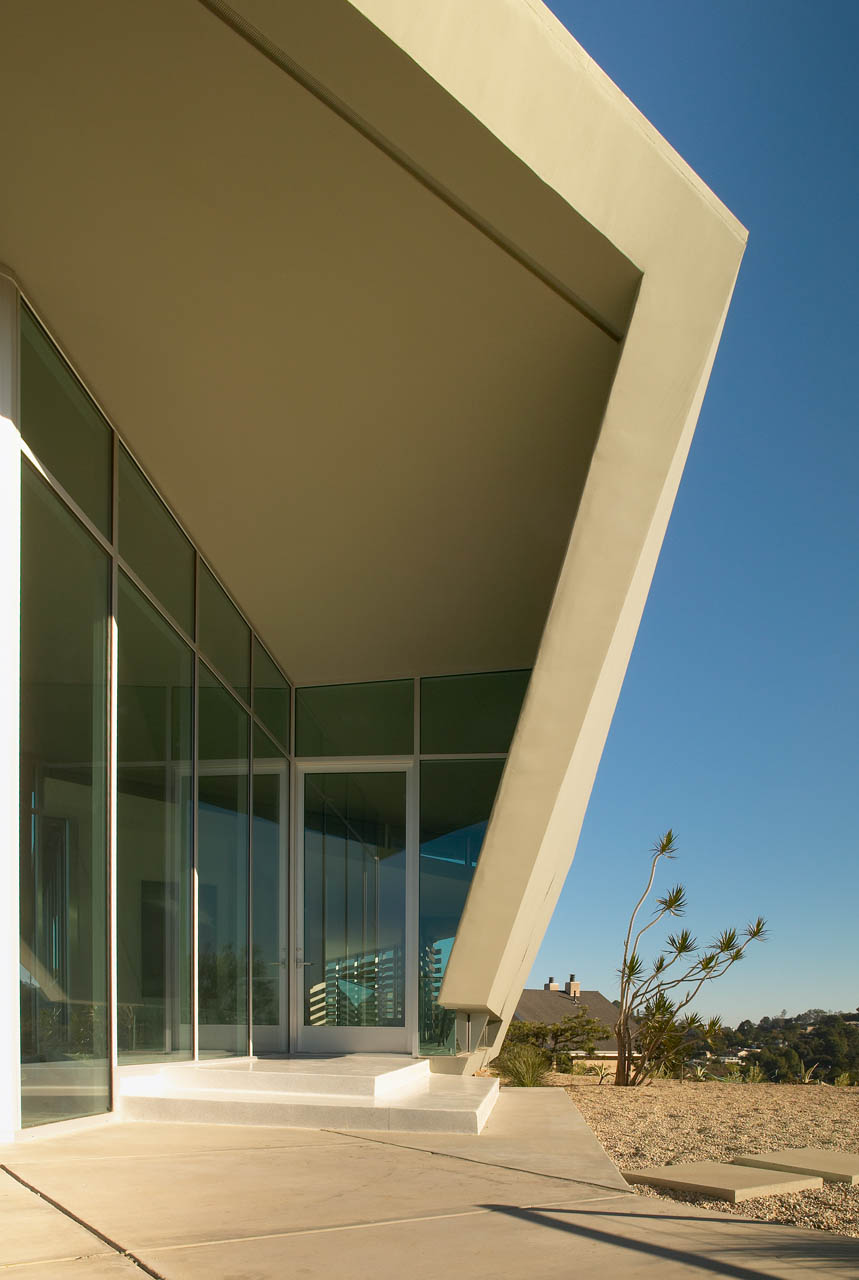 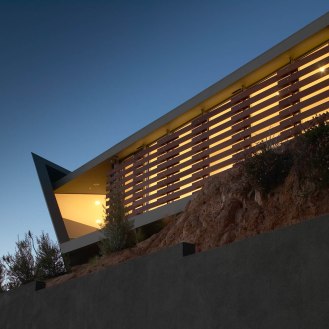 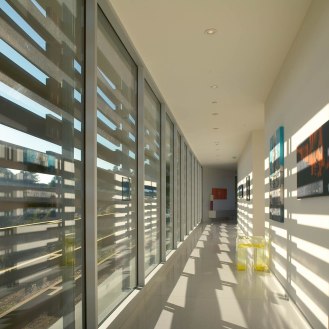 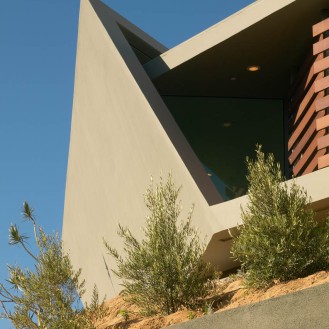 Perched atop a ridgeline in the Hollywood Hills, the Skyline Residence represents an earnest approach to creating an environmentally sensitive building without sacrificing beauty or budget. We worked with the inherent physical and visual characteristics of this challenging site to reduce the architecture’s overall imposition on the landscape and create an exceptional experience for the residents.

The 5,800sqft residence comprises two buildings – the main house and the guest house – that are formally linked, but physically separated by an auto-court in between which doubles as a gathering space for social events and a viewing platform for projections onto the southern face of the latter. By activating this exterior space and encouraging interaction between the two houses, we maximized the value of the limited available space on site.

Due to the existing ridgeline of the property, the shape of workable land was generally long and narrow, abutted at both sides by steep, brush-covered hillside. The severity of the slope and dense granite stone beneath the surface also meant that in order to keep to budget, minimal excavation was done. As a result, our design forms a linear footprint with a single-loaded corridor on the west façade of the main house that acts as a heat buffer. Both buildings formally appear as a single, folded exterior surface matched with a screen of lapped Extira (a low formaldehyde-emitting composite lumber); these two materials also help manage heat gain from direct solar exposure. Meanwhile, floor-to-ceiling walls of low-e glass on the east-facing bedrooms provide the iconic and much sought after unobstructed views of downtown Los Angeles, Laurel Canyon and the San Fernando Valley.

We made a conscious effort to minimize the carbon footprint during construction in particular. This included reusing excavated earth to eliminate export hauling while decomposing granite on site to reduce shipments of other ground materials to the site. The low-e glazing, steel, and concrete mixes were all California-manufactured; wood framing and wood flooring were recycled from a nearby construction project; and drought-tolerant flora was transplanted from a nearby demolition site. In the end, our creative approach to site planning and construction means resulted in an affordable, sustainable residence that embodies the idyllic Hollywood Hills living.

Belzberg Architects has been located in the City of Santa Monica since its inception in 1997. The firm has earned over 48 national and local design awards including over 20 from the American Institute of Architects. Their work has been featured in over 200 publications throughout more than 25 countries including frequent features in notable periodicals such as Architectural Record, Interior Design, and the New York Times.
Belzberg Architects has been honored with the City of Los Angeles Cultural Affairs Committee Design Honor Award and the Urban Land Institute recognized their design work and their contribution to excellence in urban planning. The Chicago Athenaeum Museum of Architecture recognized several of their projects with multiple notable American Architecture Awards.
In 2007, the Association for Computer-Aided Design in Architecture, Canada featured their work at the Expanding Bodies Conference which focused on “digital sensing and interactive and responsive systems.” Subsequent international exhibitions included “Material Skills: The Future of Intelligent Materials” and “Transforming the Built Environment”, both of which “explored how digital fabrication can be integrated with existing design practices to improve the productivity and efficiency of construction and manufacturing.” As a result, their research and built work was featured in and on the cover of the book Innovation in Building Design + Manufacturing for “spanning the historical gap between thought and hand, between idea and materiality.”

In the past 10 years, Belzberg Architects has grown into a multi-faceted, professional design studio capable of producing large, and diverse sustainable building solutions and project types while maintaining a personal and intensive involvement with each project.
In 2013,the Museum of Contemporary Art in Los Angeles has chosen the work of Belzberg Architects to be included in their show “A New Sculpturalism: Contemporary Architecture from Southern California”. This is the first extensive, scholarly examination of the radical forms that have become prolific in Southern California architecture during the past twenty-five years.